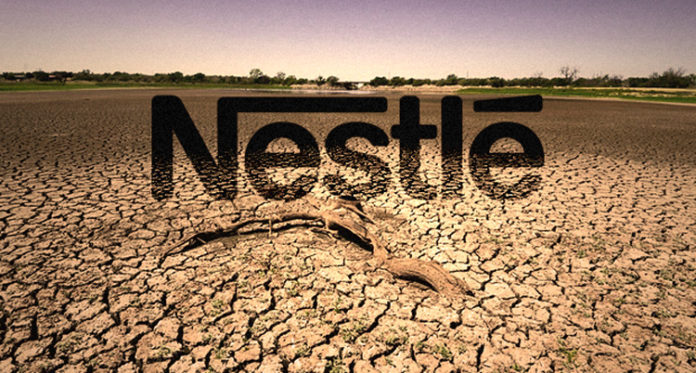 By Sophie McAdam at trueactivist.com

Their permit to extract water expired 27 YEARS AGO, but the corporation just kept on going. Finally, activists hope justice will be served…

Campaign group The Story Of Stuff Project have just announced they will be pursuing legal action against Nestlé for illegally extracting groundwater in California for its Arrowhead brand, which has been a key contributor to the State’s drought crisis.

Thanks to generous donations from a huge number of furious citizens, The Story Of Stuff Project was able to raise enough money to film a mini-documentary called ‘This land is our land’. It tells the story of Nestlé’s removal of millions of gallons of water from the San Bernardino National Forest- and it details evidence of criminal activity by one of the world’s most unethical corporations.

The Story Of Stuff Project reports:

“While filming in southern California our team uncovered hard evidence that Nestlé has been operating outside the bounds of the law. When Nestlé’s permit to remove water expired 27 years ago, the U.S. Forest Service should have turned off the spigot. But instead, it has allowed Nestlé to continue operating unabated, in violation of the terms of its own permit.

“So to defend the public resources at stake we’ve joined with two great partners—Courage Campaign and the Center for Biological Diversity—to turn up the heat on Nestlé by filing a federal lawsuit challenging the company’s illegal occupation of these public lands.”

This is great news for campaigners and terrible news for Nestlé’s CEO, who is insane enough to believe that water is not a human right and should be privatized. Activists have already shut down a plant in California, and this is the next step in the fight against greed and corporate ecocide. Please share this (very moving) video to support the campaign, and if you are still buying bottled water, please stop!

This article (Fantastic News: Nestlé To Be Sued For Californian Drought Crimes!) is free and open source. You have permission to republish this article under a Creative Commons license with attribution to the author and TrueActivist.com.

Get Your Anonymous T-Shirt / Sweatshirt / Hoodie / Tanktop, Smartphone or Tablet Cover or Mug In Our Spreadshirt Shop! Click Here
Loading...

This website uses cookies to improve your experience while you navigate through the website. Out of these, the cookies that are categorized as necessary are stored on your browser as they are essential for the working of basic functionalities of the website. We also use third-party cookies that help us analyze and understand how you use this website. These cookies will be stored in your browser only with your consent. You also have the option to opt-out of these cookies. But opting out of some of these cookies may affect your browsing experience.
Necessary Always Enabled

Any cookies that may not be particularly necessary for the website to function and is used specifically to collect user personal data via analytics, ads, other embedded contents are termed as non-necessary cookies. It is mandatory to procure user consent prior to running these cookies on your website.